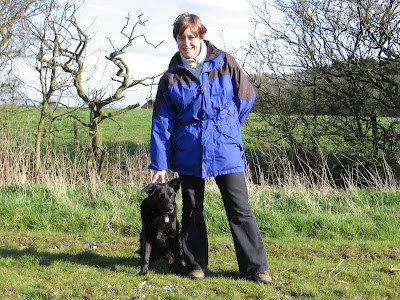 Today our new friend Noisette came for the afternoon. She said us dogs were on urr BB. That's "best behaviour" for the uninitiated. Which, of course, makes TJam out to be a liar when she tells terrible tales, but she'd rather be a liar with BB dogs, than telling the truth about the ASBO brigade, especially when new friends are concerned.

It puts me in mind of a time when TJam was making a new friend, Thistle, and we went to the beach for the first time. Beanz went behind some public toilets and ate something that I can't tell you here, suffice to say someone mustn't have had their 5p to hand. About 10 minutes from home TJam tried to casually disguise a terrible smell by opening the window, but there was no diguising this smell. Beanz had puked up her treasure down the side of the back seat of the new car (with our new friend in).

Anyway, end hazy memory sequence and back to the present day. Noisette came for a walk with us and it was all very nice. Note to TJam: don't try to cook when new friends come to tea. Or at least, make sure you have some form of ingredients in the house before they arrive, or they will be obliged to smile and say, "yum" when eating some mushrooms, kidney beans and a green pepper.