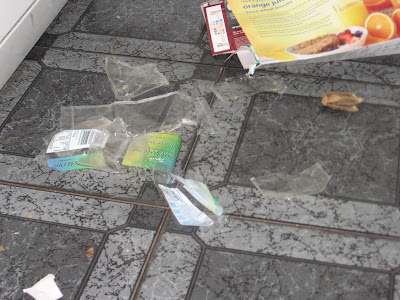 TJam occasionally treats herself to some processed vegan cheese squares to make some vegan cheeseburgers (ok, vegan burger in bread with ketchup and onions). She knows some people think it is wrong, but there you go. Now I have revealed her guilty secret. Anyway, no more cheese burgers because she forgot to put her precious cheese slices back in the fridge before going out for the afternoon.

It would have been rude to just leave them on the side.

Cheeky, but i love cheese too. Never tried the vegan variety but whatever you ca get your paws no I say!
xx Major

How ironic that a cheese company should leave spam on our blog. Especially as they are raving about cheese and we (well TJam) is VEGAN. Der.
There is nowhere to leave feedback on their site, so I hope you check back here, where I will growl at you on behalf of TJam. Grrrrr.

Have deleted the spam - was not having a go at you Major. The comment I have deleted has completely disappeared. Imagine a rogue comment in there, in between us two. And now imagine it gone... Oh, you don't have to imagine that. It IS gone!